Please Note: This is a graphic post. If you are squeamish or emotional about a chicken slaughter, please do not continue reading.

We had a psycho chicken. Actually, I think she was just sick, and may have been missing a part of her tiny little chicken brain that should have told her to eat. The poor thing would stand in the same spot all day, while all the other chickens were out gallivanting around the property digging up worms and bugs and laying eggs. Even Captain Underpants (the rooster) didn’t want to mate with her. And that means something. He is a male, after all.
The last time we slaughtered a chicken we chopped the head off since we had no idea what we were doing, and it seemed the easiest, swiftest way to accomplish the task (Side note–I have a post documenting when we slaughtered a chicken to eat–would you like to see that? Or no?).
I’ve done lots of research since then, read a number of books and watched instructional videos online, and it seems that although there are differing opinions, hanging the chicken upside-down in a killing cone and slicing the throat (I know it sounds horrible) is actually just as humane and supposedly makes for less-tough meat.
So, I finally ordered my killing cone, and it came in the mail yesterday. It was time to put psycho-chicken out of her misery. We didn’t really want to eat her since we didn’t know if she had a disease, so we decided to use her as an anatomy lesson for the kids. Homeschooling at its best! 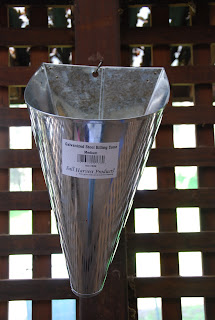 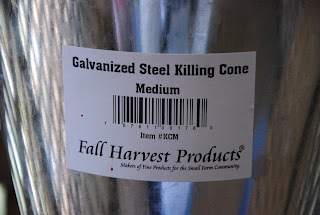 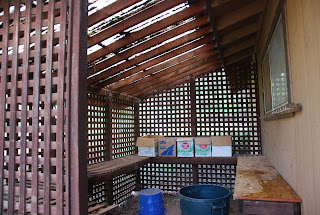 Here is the slaughtering area. It actually worked out great. I don’t know that the previous owner of this property intended for it to be used for this, but it was as if it was made just for me!

Before we slaughtered her, we gathered all the kids around and talked to them about why we were doing what we were doing. We explained that this chicken was one of God’s loved creation, and that she was suffering and most likely in pain. We shared that it is our responsibility as her caregivers to ensure that she is not suffering if she doesn’t need to be. They had all seen the miserable life she’d been living, and agreed that she was not a happy chicken. We made sure they understood that we respected her, and thanked the Lord for creating such a wonderful creature. I told them we were going to dissect her to see if we could see what was going on in her little body, and to see what the organs of a chicken look like. So, with that, I went ahead and put her in the killing cone.
Unfortunately, she was a small chicken, and so she kept sliding around in the cone. Her feet stuck out of the bottom instead of her head. Hmmm…don’t think that’s how it was supposed to be. Superman helped re-position her, and then he took over the video responsibilities so we could have the kids’ first chicken slaughtering experience on video. I slit her throat (with my brand new pinning knife–incredibly sharp!), and it only took a swipe or two, and she was bleeding out. I thought she was gone, so I let go, but that was probably a mistake. She started flopping around, and flopped right out of the cone, all the way across the slaughtering area, and right into the trash can! I guess she knew where she was headed in the end.
After a few minutes, I took her out, cut her head off, and dropped her into a pot of scalding water for about 30 seconds. Her feathers came right off, and all the kids helped pluck her. 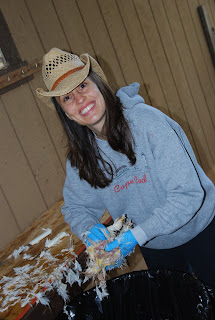 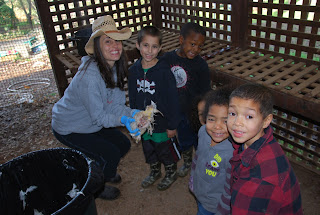 In the end, the kids all seemed intrigued and honestly interested in learning about the different parts of her body. They weren’t scared or crying or scarred. It was a great learning experience for all of us, and a really good reminder of just what goes into preparing the meat we just pick up from the store, nicely packaged and covered in plastic. Maybe not the way everyone wants to spend their Saturday morning, though. If there was any doubt in my mind whether I have fully converted to being a Country Girl, that is now vanished. I felt completely in my element and although I didn’t enjoy the actual killing of the chicken, I believe it was necessary and justified.