Oh, the fair. Carnival rides, overpriced stuffed toys, and fried, greasy foods. Nothing like it, right? Not really the place for grain-free funnel cakes, though. I’ve only tried traditional funnel cake a few times, but they burned a sweet, greasy image into my tastebuds. 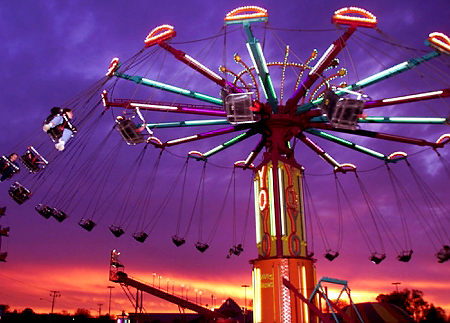 These grain-free cinnamon funnel cakes are seriously good. They are reminiscent of the real thing, but without the nasty stuff that goes along with fair food. They were gobbled up almost as fast I could make them!

Heat oil in a large pot over medium heat until a drop of batter immediately sizzles and floats to top. While the oil is heating, mix dry ingredients in a large bowl. In a separate bowl, whisk together the eggs, syrup or honey, and sparkling water. Add to dry ingredients and stir to combine.

Once oil is ready, using a large serving spoon (the kind you would use to serve a dinner casserole or something), pour a spoonful of batter straight into the oil. Note: You could put some batter into a large Ziploc bag, cut off a corner, and “funnel” the batter out, but this was oh, so much easier, and worked just as well. Don’t swirl the batter around, just pour it into a “pile.” It will float to the top. Add another pile in, if you have room, and let cook, undisturbed, until the bottom is golden brown. Gently turn over and fry the other side, until done. Remove onto a wire rack covered with paper towels. Eat while still warm.

P.S. You could top these with powdered sugar, cinnamon sugar, or a homemade glaze if you so desire, I just avoid processed sugar and so didn’t use any.